Gun control has been all the rage in the news lately. Background checks, bipartisan discussion and mental health have been prominent in the news coverage of the debates on gun ownership, sales and control. Saturday Night Live even spoofed the gun control debates with impersonations of Democratic Senator Joe Manchin and Republican Senator Patrick J. Toomey reluctant to share their new “plan” for gun legislation with the public because it would likely cause them to lose their jobs. (Read more here: http://www.hollywoodreporter.com/live-feed/snl-mocks-gun-control-compromise-439078). Meanwhile on Facebook, Twitter and other social media outlets we see varied outpourings of support for both sides of the cause from left-leaning papers examining the issue to shaming of government officials through right-wing memes such as this one:

Regardless of where you stand on the issue, it is highly contested and highly visible in the media. Recently in my perusing of the social media landscapes debates on this very issue I came across an argument that is perhaps less immediately visible in the mainstream media. It was an interview with a former school shooter (see the original Bridge Magazine piece here: http://bridgemi.com/2013/04/chelsea-school-shooter-gun-control-wont-help/) Stephen Leith, a disgruntled employee, who in a fit of rage in 1993 shot and killed his school’s superintendent. Leith was a science teacher at Chelsea High School near Ann Arbor, Michigan and after a reprimand he filed a grievance against the school’s administration.

Leith had been collecting firearms (including assault rifles) since 1986 and twenty years after the shooting sits in a cell and notes that he would have passed a background check and would have had no problem taking one, he had a clean record. He is not interested in the gun debate per say. He’s not interested in Senator shaming or leftist mocking. He’s interested in God. He had gone home to cool off the day he shot three school district employees, but his rage grew and he returned to the school, shooting even his “best friend” without any recognition of the enormity of his actions until it was too late. Now? He’s interested in prayer and meditation. He plays Christian music and leads music during services. He told Bridge Magazine that the cause of violence is not guns but morals. “He points to abortion, homosexuality and the banning of prayer in public schools. His own life, he concedes, was on a downward spiral until, while awaiting trial in the Washtenaw County jail, he became a follower of Christ.

‘If I had been focused on Christ, this would not have happened,’ he says. ‘I would say the greater solution is not the controlling of guns. It’s getting people turning back to their God.’”

So what do we make of this? What place does God have in a highly contentious political debate that centers around life and death. In a world full of religious and poltical divisions where does an argument like this fit in?

When I initially read this, I dismissed it as religious posturing. An opportunity to use a prominent issue to further one religion’s proselytizing. But upon further reflection I recognized that Leith truly believes that a love for a higher power would have stopped him and that by spreading the love of Christ he can “make a difference.” Which then led me to wonder in our so-called secular society in which church and state purportedly stand starkly separate from one another what role religion had in such decisions as legislating guns. We claim to be a secular society, yet our countries values are deeply steeped in Judeo-Christian values and norms. Yet there is a distance between the normalization of a Judeo-Christian secularism and the religious worship of Christ. We have seen emotional pleas from parents from Newtown that gesture towards faith or Heaven, using these common tropes to implore other parents to take on this important cause. We have seen the President take a strong stand pushing for reform. Making promises in the names of the various victims of the mass shootings that have plagued our nation. 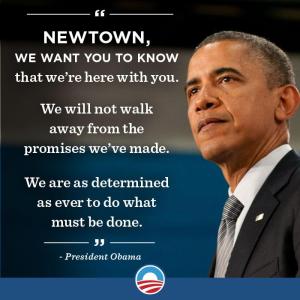 These actions gesture towards the religious without ever explicitly making the leap, but Stephen Leith? He flat out made a moral and religious statement. We have turned our backs on God. To many of us it seems ridiculous to blame homosexuality or freedom of choice for violence, access to guns or lack of attention to mental health in the gun laws. These arguments, however obtuse they may outwardly seem to many progressive minds, exist and cannot be overlooked. We must grapple with questions about the role of religion in our modern processes of legislating issues that are emotionally charged and that have real life and death consequences. The very consequences we, as a society, often turn to religion, faith or spirituality in order to face. What then becomes our individual responsibility in the gun control debates? How can we reconcile our unique and diverse religious beliefs (or lack thereof) and experiences with this statement? Is America morally bankrupt or is our progress in our multi-faith intercession and debate? When we make the religious the answer does that erase the practical, political debates? On the other hand, if we remove the religion or faith from the debate, does the debate lose its meaning? In a country where bipartisan supported mandatory background checks were just defeated in the Senate and with a powerful gun lobby, we have to tackle the questions of why. Perhaps the answer depends on what you believe.