On May 22 Pope Francis made the following statement:

“The Lord has redeemed all of us, all of us, with the Blood of Christ: all of us, not just Catholics. Everyone! ‘Father, the atheists?’ Even the atheists. Everyone! And this Blood makes us children of God of the first class! We are created children in the likeness of God and the Blood of Christ has redeemed us all! And we all have a duty to do good. And this commandment for everyone to do good, I think, is a beautiful path towards peace. If we, each doing our own part, if we do good to others, if we meet there, doing good, and we go slowly, gently, little by little, we will make that culture of encounter: we need that so much. We must meet one another doing good. ‘But I don’t believe, Father, I am an atheist!’ But do good: we will meet one another there.”

Almost immediately, images began appearing as “Good Guy Pope” and questions of the meaning of the statement came to light. The general interpretation of this statement is divided. On the one side there are those that understood this as a statement that all people are redeemed and saved, regardless of faith. Examples of this can be found in the New York Daily News and on The Colbert Report. In this clip, Steven Colbert, the self-proclaimed “Pope of basic cable” echoed, in his standard, irreverent way, a sentiment that was shared by many:

“Even atheists?!? I am a Catholic and I am a Catholic so that I can have the fast-track paradise easy pass because I am in communion with the one true church… I just think that maybe someone should have mentioned that believing in God was optional.” He then proceeds to pray to a stapler.

While Colbert’s statements reflected attitudes of confusion that seems to have been distributed throughout the lay communities, priests (and other authorities) offered explanations focused on the key differences between redemption and salvation. Fr. Andrew Stephen Damick, an Orthodox priest offered the following on the blog, Orthodoxy and Heterodoxy:

[This] is not universalism. It might appear to be so if you don’t know that there is a difference in traditional Christian theology between being saved and being redeemed. The redemption that Christ accomplished through the incarnation, cross and resurrection was for all of human nature, and so it is quite correct to say “The Lord has redeemed all of us, all of us, with the Blood of Christ.” Redemption is something that happens for human nature, which is why all will be resurrected in the end and why all are capable of doing good.

But Francis holds out the possibility here for an encounter, that we may “meet one another” when good is done, by whoever it may be done. And he is absolutely correct. All good is from God, so even an atheist—even an anti-theist—who does good is in some sense participating in God’s goodness by virtue of his redemption by Christ and remaining created according to the image of God. But that doesn’t mean he is saved. 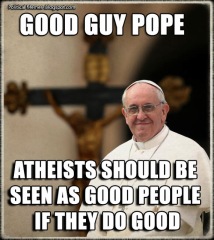 The argument that Damick is advancing is that the ability to do good is, like redemption, a quality that is inherent in all humans. Salvation, on the other hand, is enabled through universal redemption, but takes individual acceptance of Christ to be achieved. He also highlights that the point of the initial statement was not redemption, but the possibility of doing good. Many non-Christians agreed with the final statement and focused on the Pope’s statements as affirmation that morality and good works are not solely the property of the religious. Many also saw it as a vindication of their belief and as proof of the normalization of atheism that it was singled out.

However, as expressed by several voices on Reddit, the idea that all people could do good is not a new one, nor is the delineation between salvation and redemption.

The users add another aspect to the discussion, that of offended atheist who see their redemption as a high handed statement. The sentiment is echoed in this article from the Huffington Post, which ends with the statement:

There are of course countless moral issues to talk about, and I truly hope that Pope Francis will continue to reach out to atheists. Maybe we can start to have a meaningful dialog on these and many other moral issues in the future.

This highlights the key point in the pontiff’s statement: opening up inter-religious dialogue in a way that it had previously been closed under Benedict and again pushing towards dialogue between religious groups. However, unlike under previous pontiffs, who formerly called for inter-religious dialogue, this is calling for a dialogue between the religious and the non-religious. More than just calling for the dialogue, Francis identifies the space for that dialogue, framing as an encounter over good deeds rather than an opportunity to debate ideas and beliefs.

Here the use of space, both in the initial statement and in the mediation of the conversation surrounding it, is the most interesting aspect. As with most discussions occurring online, this conversation was multi-dimensional, occurring on numerous platforms and continuously informed by all of them. (My first exposure to this was a screen shot from Tumblr posted on Facebook via a link to Tickld.) Conversations from one delineated space flow into others with almost no resistance and are propagated through practices of sharing, in turn generating new conversations.

Within the original statement, Pope Francis promotes a “culture of encounter” and speaks of it as a “path towards peace.” This Patheos article deals with some of the practical concerns of a “culture of encounters,” but regardless of practical applications, the metaphor presents good deeds as a space for commonality and as a starting point in dialogue. Like the previous quote from the Huffington Post, Francis is putting forward not a space for religious debate or another avenue for conversion, but a space to encounter each other and have a dialogue concerning moral issues.