The idea of “coming out” has a long history that has evolved from the religious ritual of the confession.  While not necessarily identical (a confession in the traditional Catholic notion is done in private to a priest and coming out involves disclosing your sexual orientation to friends and family), the notion is still remarkably similar in that they are both ultimately about confessing your deviance.  While it has become more accepted in the past few decades, that acceptance has largely come about through the “queering” of the confessional by making this declaration no longer a private matter between those closest to you, but to sharing your sexuality with the world.  This public coming out has become a central rallying of the LGBTQ community, with leaders like Harvey Milk stating,

This quote highlights the two-fold idea behind the notion of coming out as a process of liberation.  The first is that sexuality is an invisible trait that could be ignored and that by coming out to people, you force them to see and acknowledge your sexuality, which will eventually lead to widespread acceptance.  The second idea is more personal and that is – once you are able to live your life openly then you will lead a happy and fulfilled life.  Emerging from a long religious tradition of the saving power of the confession, there is this idea that through confessing this part of your life to those close to you that there will be this metaphorical weight lifted off of you.

Moving forward about 35 years from Harvey Milk’s death, the call for coming out is still a major component of the LGBTQ rights movement, although the call has updated itself for the digital age.  “It Gets Better” is a YouTube campaign attempting to intervene in the high prevalence of teenage suicide rates among LGBTQ youth. 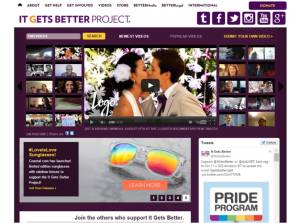 The YouTube Channel allows users to discuss their stories with growing up as LGBTQ and to share their coming out experiences.  This opened up a new forum for the dialogue to occur and allowed people to come out. Not just gay individuals posted videos, but also straight allies began making videos to share their support.

This takes the stories and the sharing of your identity away from just being with the people who you know personally, but starts to make it a more global confessional, a far cry away from the traditional idea of an anonymous confession behind a screen.

Suddenly, the notion of coming out is not just about being able to live your life as you see fit and being open with your loved ones about who you are, it is about shouting your identity to the world.  This is not to say that the personal element is completely removed, even if the personal is becoming public instead of private.  This is evident in a seemingly growing trend of capturing this moment in time on video (sometimes through hidden cameras) and sharing it on social media sites such as YouTube.

This public broadcasting of these private moments is not specific to the LGBTQ community or to the coming out process, but builds upon an already popular notion of the public confessional, in which our innermost secrets are shared with the world through mediums such as Daytime Talk Shows (just think about how many people want to broadcast the results of paternity tests on Maury or the confessions people make in search of self-help on Dr. Phil),  celebrities sharing their health issues publicly, and even the broadcasting of personal relationship issues on social media platforms like Facebook.  We no longer live in a world that has a clear line between private and public, but that line has become very blurry.

I do not wish to focus on this sharing of private moments too much, other than to suggest that this blurring the line between personal and public may help to create a space in between the two.  A space that would allow these moments to exist both as private and public simultaneously, making them available for others.  This could, in a way, help inspire individuals to be able to come out or consider how they would react if someone come out to them.  An interesting product of these videos is the reinforcement of the ritualistic process of coming out as a confessional.  These are not spur of the moment confessions that arose naturally, but they are planned discussions in secluded venues (much in the same way one would have gone to a confessional booth in a church to disclose their secrets to a priest).

Understanding the motives for sharing (or even recording) these videos can be difficult, but they seem to have almost a dual purpose.  The first (and most obvious) is that there is an activist element to these videos.  They can help to create greater visibility to the LGBTQ community and to the struggles one often faces when deciding when, how, and to whom to come out.  Not only can these videos show how supportive and positive family and friends can be (thus helping to build confidence in fearful youth), they are also able to capture the times when it does not go well. On one hand, this can help to highlight the need for more and more individuals to come out, really hearkening back Harvey Milks call to action and the belief that individuals who personally know gay individuals are less likely to be bigoted.  By making these negative experiences visible, it helps to dispel any myths that we live in a post-homophobic society.  The broadcasting of the coming out experience helps to increase the visibility of this very personal process in ways that Harvey Milk would probably never had imagined.  It is claiming a space in online forums that is spreading beyond just the interested communities but to larger audiences who may have otherwise been unaware of these challenges.

In addition to this activist motivation, these videos also seem to help form or a create communities of support.  This became evidenced very recently with the story of Daniel Ashley Pierce who, after coming out to his family six months earlier, secretly recorded his family disowning him and kicking him out of the house.

This video went viral, receiving over eight million views.  Additionally, a GoFundMe account was set up to raise money for Daniel, which has now raised over $100,000 from around the world.  Additionally the comments on the YouTube page with the video have been largely supportive of Daniel, helping to provide him a supportive community online in lieu of his family house.

With the best of intentions of helping others, or at the very least attempting to find a supportive community online when unsure if your family or friends will be supportive, these coming out videos also seem to feed into a the new social norm of broadcasting of our lives through social media.  With sites like Twitter, Instagram, Facebook, and Snapchat, we are living our lives and sharing intimate details with more people than ever before. Why should these once private and intimate moments be any different?

Coming out or making a public confession is not an experience exclusive to the LGBTQ community. Nor should it be construed that public confessions did not exist before social media.  Michel Foucault (1984) wrote about the pervasiveness of confession in The History of Sexuality, Volume 1: An Introduction.

One goes about telling, with the greatest precision, whatever is most difficult to tell.  One confesses in public and in private, to one’s parents, one’s educators, one’s doctor, to those one loves; one admits to oneself, in pleasure and in pain, things it would be impossible to tell to anyone else… (p. 59)

In other words, confession about aspects of our lives is an ever-present part of the world in which we live.  Social media is taking that confession and blasting it out to people who we have never met before with the idea that it is through coming out about whatever we find challenging in life that we will be able to live happier and freer lives.

In a project that mirrors the It Gets Better campaign, Openly Secular is an organization seeking to help make life more inclusive of individuals who are, “atheists, freethinkers, agnostics, humanists, and nonreligious people.”

In wording that is very similar to that of the It Gets Better project, the goal of Openly Secular is to allow a space for individuals who are not religious to share their personal stories and begin to change people’s opinions, with the ultimate goal to end discrimination against those who are secular. As their homepage states:

If you’re Openly Secular, you can help get our message out and truly make a difference in our fight to end discrimination against secular people by telling your story and encouraging others to do the same.

This movement came into media awareness when current Houston Texans running back, Arian Foster, came out as secular in a video in which he discusses the hardships of not being religious in today’s society.

These secular “coming out” videos and the It Gets Better videos both involve individuals (sometimes groups) telling their personal stories about their experiences with discrimination or having to keep their lifestyle secret, ultimately both preaching the notion that once you come out (as fill in the blank) your life will get better.  There is this idea that it is only through declaring your identity, whatever that may be, that you will be able to live a truly happy and free life.  Projects like Openly Secular and It Gets Better are helping to create safe spaces for individuals to share their identities with each other, and by extension, the connected world through sites like YouTube where some of these coming out experiences are viewed by hundreds of thousands of people.  Social media sites are providing new forums for confession that are far more public than Foucault every imagined, as well as helping to create new support communities online.